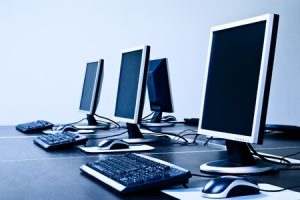 In the 20+ years that we have been providing software QA services, we’ve rarely had much demand for compatibility testing on workstations or business-focused systems. While we’ve done a test here and there over the years, our bread and butter (as far as hardware testing in concerned) has typically been consumer-focused systems. We’ve recently seen a bit of a resurgence of interest in testing on workstations, so we’ve begun carefully expanding our inventory of systems and hardware to support this. Given the history here, we’re easing into this, so our initial offerings are mostly re-purposed office systems that were already in our (non-testing) inventory:

We’ve also started stocking a few workstation video cards to allow us to differentiate these configurations a bit more, although it is nowhere near a comprehensive inventory:

These were by request of a specific project, but they fit in nicely with the expansion of our testable ‘office system’ inventory. We’ve also added a couple of current-generation consumer cards, which have nothing to do with this expansion:

We’re always adding to our inventory of testable systems. It’s always nice when we can leverage existing systems into this role, but we are also open to making purchases of hardware if a current project requires it, too. As always, feel free to contact us if you have any questions or would like to discuss involving our QA services in one of your projects.