Testing can take time, but it shouldn’t take too much time. If you find your testing team is spending far too much time waiting for their tests to complete, then you need to ask if they’ve implemented a test automation pyramid.

A test automation pyramid, or testing pyramid, is a vital framework that is essential for producing a high-quality product and doesn’t take too much time to test. In other words, a testing pyramid can improve the quality of your product and reduce testing time. 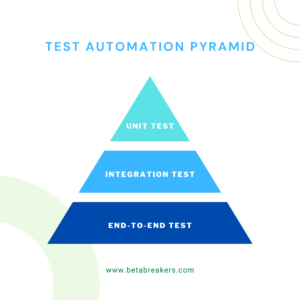 Here, we go through everything you need to know about the test automation pyramid so you can implement it in your testing strategy.

What is test automation?

What is the test automation pyramid?

The test automation pyramid lays out the various tests that need to be included in the codebase’s test suite as well as the sequence and frequency in which they should appear. Doing so provides immediate feedback to your testing team to prove that code changes will not break existing features. As a result, a testing pyramid reduces the time required for your team to figure out if a specific change will break your code.

In general, the test automation pyramid has three levels of operation:

Below we go through each level of the pyramid:

Unit tests are level one, or the base of the testing pyramid. A unit test will determine if the internal components, or units, of your codebase function as expected in isolated conditions. These components could be individual functions or a class. You will need to run various scenarios in the unit test, and since this is the largest subset (which will only grow as you add new features), you’ll need to run those tests as quickly as possible.

To test your product effectively, you need a qualified QA team to support you. Beta Breakers has experience with various types of test automations. To learn more about our services, contact us today.