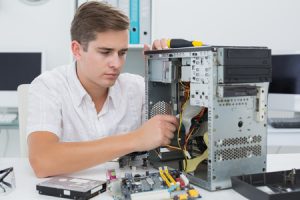 Over the years we’ve conducted innumerable PC hardware compatibility tests. Originally, this was a service that was almost exclusive to video games, but now includes standalone applications and professional software as well (although games are still a big driver).

Config Boards are essentially a bare motherboard, CPU and hard drive, to which any power supply, video card and amount of RAM can be added (subject to the usual technical limits, of course). These systems are usually lab-built, although we’ll sometimes use particularly robust OEM systems in this role as well. Config boards are easy to work inside and provide an easily-repeatable and consistent baseline for testing individual component compatibility and performance (in practice, usually video cards). The downside is that the configurations are fairly homogeneous compared to a ‘wild’ sample, and there is considerable handling required. This means that a project using only config boards will generally take longer and incur higher IT-related costs. This approach is most applicable to desktop testing; it does not lend itself well to testing integrated GPUs or laptop components in general.

In practice, we’ll often make relatively minor configuration changes (adding a video card rather than test a redundant embedded GPU, increase/decrease RAM to within a target range, etc.), but generally each system is tested once, in one configuration. Standalone systems increase the diversity of component testing and are closer to a ‘wild’ sample group than config boards. However, their performance can be difficult to compare, and their configurability is often limited, particularly by form factor and motherboard. This approach works best for testing components that are not realistically swappable, such as laptops in general and embedded GPUs.

Historically, we’ve found that most projects prefer standalone systems to config boards, although the overwhelming majority make use of both (standalone systems make up the bulk of testing, with config boards being used mainly for higher-end components that may be incompatible with an off-the-rack Dell or HP box). In a vacuum, we prefer to leverage config boards as much as possible for their consistency, but we are fully capable of supporting both approaches to hardware compatibility testing.

As always, feel free to contact us if you have any questions regarding our lab hardware, or if you are interested in leveraging our QA labs for one of your software testing projects.